Book Review: Bring Me Back 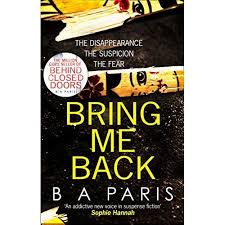 Title: Bring Me Back

A young British couple are driving through France on holiday when they stop for gas. He runs in to pay, she stays in the car. When he returns, her car door has been left open, but she’s not inside. No one ever sees her again.

Ten years later, he’s engaged to be married; he’s happy and his past is only a tiny part of his life now. Until he comes home from work and finds his new wife-to-be sitting on their sofa. She’s turning something over in her fingers, holding it up to the light. Something that would have no worth to anyone else, something only he and she would know about because his wife is the sister of his missing first love.

As more and more questions are raised, their marriage becomes strained. Has his first love somehow come back to him after all this time? Or is the person who took her playing games with his mind?

This was a true suspense, kept me on the edge of my seat and I had to keep reading but the ending wasn’t what I expected and not something I am into… So not my best!